The objective of this study by Lineback, et al. (2018) was to evaluate the efficacy of eight registered disinfectants (six registered by the Environmental Protection Agency and two products registered in by the European Chemical Agency) with general bactericidal claims, but currently no biofilm efficacy claims, against Staphylococcus aureus ATTC-6538 and Pseudomonas aeruginosa ATCC-15442 biofilms. The researchers hypothesized that hydrogen peroxide and sodium hypochlorite disinfectant products would be more effective than quaternary ammonium chlorides.

In general, the researchers concluded that bactericidal efficacy against biofilms differed by active ingredient. The efficacies of sodium hypochlorite and hydrogen peroxide disinfectants did not vary between strains, but there were significant differences between strains treated with quaternary ammonium chloride disinfectants. 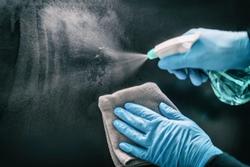