An “exponential” outbreak of COVID-19 occurred among health care workers most likely because they let their guard down during social interaction with colleagues.

Beware the hospital breakroom. Infection preventionists and other health care professionals should keep following infection prevention protocols even when they are on break or some other place in the hospital other than their workstations. That’s a point that’s been made before, and it’s been backed up recently in a study conducted by investigators with Mainz University Medical Center in Germany. That study, published in the American Journal of Infection Control, looked at just want caused an “exponential” outbreak of coronavirus disease 2019 (COVID-19) among health care workers at the medical center in March and April 2020.

“The mandatory donning of face masks was implemented on day 4 of the outbreak, however, further infections were identified, possibly as a consequence of not wearing a mask in social situations (conversations, breaks, etc),” the study states. “There appeared to be a tendency to remove the mask in a situation that was considered ‘social’ as opposed to ‘work.’”

In other words, SARS-CoV-2 doesn’t care whether you’re on break. Investigators also found that by the time 1 health care worker is found to be infected with COVID-19, it’s often too late to contain the spread. The outbreak began probably before the first health care worker tested positive for COVID-19 on March 14. The people that that worker had been in contact with were identified and quarantined. The medical center allowed workers to return to their duties when 2 consecutive SARS-CoV-2 tests came back negative. The wearing of face masks became mandatory for all employees on March 16. However, at that point there was a shortage of N95 masks, and so some employees had to use surgical masks.

“When treating patients with known COVID-19 infection or suspicious of COVID-19, full PPE was used (FFP2 mask, face shield or goggles, gown, double gloves),” the study states. “Of note, the wards and lunch\rooms are not equipped with ventilation systems expect for regular windows. In contrast, all the operation rooms have a ventilation system which is mandatory.”

The medical center kept in contact via phone with workers who’d been quarantined, asking about symptoms and well-being. Investigators recorded data on onset, severity and duration of symptoms.

The first health care worker who’d tested positive for COVID-19 had just come back from Austria complaining of mild flu symptoms. All contacts were categorized into clusters according to recommendations of the Robert Koch Institute (RKI). The area where that person worked was designated high risk, and 7 people that that person had been in contact with were quarantined for 14 days, but none of them developed COVID symptoms. However, within 24 days, 13 health care workers had tested positive for SARS-CoV-2 (a positivity rate of 10%), despite the actions taken by medical center administrators.

Investigators write that “containment of a single SARS-CoV-2 infection within a department is particularly difficult once the spread has started, resulting in an exponential spread of SARS-CoV-2 infections. “Immaculate and flawless” clustering is a crucial response in the event on infection. Investigators conclude that they missed at least 1 person who’d been in contact with the original person who’d been infected and that led eventually to 13 employees being infected.

“The fact that the lunch or break rooms on the wards were not supplied with any ventilation system other than opening windows, may have contributed to the transmission,” the study states. “During our teachings, employees were very aware that patients could pose a risk of SARS-CoV-2, but co-workers were not considered as a possible viral source and the masks were removed without concern. It is known that wearing face masks significantly reduce the risk of viral transmission not only during COVID-19 but also during influenza.”

The stringent infection prevention and control measures implemented seem to have worked, as no other health care worker tested positive for SARS-CoV-2 between April 8, 2020 and mid-November, and none were reported again within the particular department in which the outbreak occurred.

Still, some infected hospital professionals suffered damage that lasted a quite a while. The study states that “we noticed that older members of our cohort suffered more severe fatigue and lasting neurological symptoms. One member of our cohort still suffers ageusia/dysgeusia, which is doubtlessly caused by the SARS-CoV-2 infection.”

Another member had to have surgery for a case of cerebral microinfarction due to carotic stenosis. “Of course, the underlying disease was already present at the time of the SARS-CoV-2 infection, however, there is growing evidence that the aggravation of neurological diseases is associated with SARS-CoV-2,” the study states.

The study concludes: “Outbreaks of SARS-CoV-2 are particularly difficult to contain in a medical setting, where employees work in close physical proximity. Stringent adherence to preventive measures, particularly wearing face masks at all times, seem to be effective. Middle-age individuals appear to be at greater risk for long-lasting symptoms of COVID-19, even after a moderately severe course of the infection.”

For more coverage based on industry expert insights and research, subscribe to the Infection Control Today® e-Newsletter here. 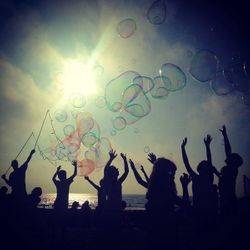