Q&A: COVID Experience Might Not Bolster Infection Control’s Standing, After All

Michael Millenson: “Infection preventionists are not exactly at the top of the hierarchy. Right? And medicine in hospitals is very hierarchical.”

It perplexes Michael Milllenson, an internationally known healthcare expert, why infection control has not been taken more seriously in healthcare. It seems to perplex him even more that that might still be the case despite what we’re going through with the COVID-19 pandemic. In a wide-ranging interview with Infection Control Today®, Millenson argues that zero tolerance for infections in healthcare settings must be a goal, and not just a slogan. Millenson, the president of Health Quality Advisors LLC, and an adjunct associate professor of medicine at Northwestern University Feinberg School of Medicine, says that the impossibility of accurately tracing contamination removes an element of personal responsibility from the mix. That needs to be addressed.

Infection Control Today®:You’ve been lately investigating how COVID-19 might change infection prevention. What have you found?

ICT®:You've mentioned before how outraged you were that infection prevention was ignored for decades.

Millenson:I think that it’s kind of one of those things that’s been in the basement of a hospital. Right? It’s kind of like: “Yeah, yeah, yeah, we do that.” Right? As opposed to having an aspiration to do it right all the time to keep people safe as possible. We’re a kind of a check-off-the-boxes, regulatory thing, then an aspirational to-do-things-the-best. I think what I might have said in our last conversation, where I talked about a comparison to clinical care, you would never have anybody say: “You know what, I think this this week, we gave cancer care according to the guidelines. I’m pretty sure we did, but we’ll check that box.” Whereas with regulatory kind of attitudes towards infection control, it’s often kind of: “Well, we did what we had to do.” And it’s people's lives. You know, one of the things that would shock anybody outside healthcare—but seems completely not shocking within healthcare—is referring to infection control as a cost center, not a profit center. And I think anybody outside of the healthcare world would be shocked by that. “Wait a second. You’re not investing in keeping me safe because it’s not profitable?” It’s bizarre, but yet, as you know very well and as your colleagues know very well, that’s a commonplace in infection control.

ICT®:Henry Ford famously said that if he had asked people what they wanted, they would have said a faster horse. Is infection control still looking for that faster horse? Or is it looking at what might be rolling over the horizon?

Millenson:What I think is going to happen is that the technology is going to enable us to look at variables in ways that we didn’t think of. It’s going to open up avenues. Clearly, if Henry Ford had been selling his cars to people who had regulatory requirements to check off how their horse performed, he would have looked for a faster horse. Right? And that’s part of the problem. In the hospital: “This may be great, but I can’t check the box.” I think the box checking is a problem. Having said that, once you unleash the technology, the ability to find new things and do things differently, is something that’s going to grow over time. The second thing that’s going to help—again this is going to take time—is if you take a look at the medical literature on AI and a lot of these other technologies with surveillance and infection control, it’s really in a very early stage. The studies don’t agree. The studies are new. How much money is it saving? I think as you get more of an evidence base, which again takes time, you’ll get more adoption. Now, on the other side of helping patients you have: “Will these kind of surveillance systems help protect my workers?” And so, if you start to make the case that this is going to help you protect your nurses and doctors and others from being hurt, or burning out or whatever, that’s a completely different business case. And that might—if we get there—that might incent adoption. On the other side of the ledger, you have hospitals saying: “We lost a ton of money. We shut off the spigot for all our surgeries, all our electric procedures. Everybody coming in here. And this technology may be great, but right now we don’t have the bandwidth to look at anything other than get back running again, get the cash machine turned on, deal with the here and now.” And that’s completely understandable. We have to see how that plays out.

ICT®:I wonder why, over the years, the demand for better infection control and prevention hasn’t bubble up from the bottom? By that, I mean, why haven’t doctors, nurses, infection preventionists, environmental services staff, and others who work in the trenches demanded it?

Millenson:That’s a question I’ve thought about a lot. And I think there are several answers. And they all really revolve around culture. You have a bunch of smart people trying hard, trying to do the very best they can in a complex system. And when there have been infections, there’s been a tendency to see them as inevitable and not preventable. And even when the medical literature sometimes says it can [be prevented], people are busy in their day-to-day life and say, “You know what? These people are sick, really sick. They’re vulnerable. That’s why they’re getting infections.” Second thing is that there’s no individual accountability in a sense. So, if you were on a nursing shift, and the patient falls, you may think it’s because a lot of reasons, but at least you know, the patient was OK. These people were supposed to keep them from falling, and he fell. There’s at least some sort of chain of events that you can look at. Whereas when it comes to infections, if I touch somebody and pass on a pathogen, a little red light doesn’t go off. There’s not a siren. Nobody says that was me who did it as opposed to somebody else, or it was our healthcare team here as opposed to the guys earlier on or in the community. There’s not a feeling of responsibility. You look at hand hygiene, which might be sloppy. They genuinely don’t realize that they’re causing problems. If you see the problems without any direct accountability, if people are trying hard, if people kind of say, “Well, you know, stuff always happens in healthcare. It’s inevitable.” You don’t end up with a bottom up demand, particularly when you then add the attitude that this is a cost center. When people were being paid extra for infections, or if infection control is simply seen as adding a bunch of people to meet regulatory requirements, and there’s no sense of—shame, accountability, chagrin—I don’t know what you want to call it, for the infections that happen, you end up with: “Let’s put a system in the basement and have a couple of people keep track of what’s happening. It’s a shame. I find it outrageous, troubling, and incredible this persists. But what makes it again so difficult is there’s no bad people doing this. It’s kind of apathy and inertia, and just people who are trying to do the best and don’t see that they’re not succeeding. Plus, quite frankly, infection preventionists are not exactly at the top of the hierarchy. Right? And medicine in hospitals is very hierarchical. That’s just the way it is.

So that makes it difficult.

ICT®:Do you think COVID-19 is going to change that? Infection preventionists will move up in the hierarchy?

Millenson:I think it is. But again, when I talk to the people who’ve been in the frontlines, they’re not as certain that it will. But I think it is, and I think it will, in part, because the impact of infections has been felt by hospital staff, as well as by patients. And in part frankly, because this pandemic is not going away anytime soon. And so the visible effects of lack of infection control are going to be with us a long time. Plus, you’re going to need to reassure patients, reassure payers, right, so the visibility of infection control has gone up and becomes more important. You know, hopefully, the ones that are not as visible don’t end up being ignored. I think it should cause infection control over the long term to be more important. Unfortunately, and understandably, hospitals and doctors are still adjusting to the short-term shock of basically having income go down to zero.

ICT®:If you had the power, how would you change infection control in this country?

Millenson:Frankly, for infection control and everything else to do with patient safety, I would say we need the culture of your hospital to be a high reliability organization. And you and I, have seen over the years. How many PowerPoint slides comparing hospital quality processes to, say, military ones and an aircraft carrier or a submarine or something like that. I’ve visited submarines and other military facilities to see what goes on. You need to have the culture which says: “We’re a high reliability organization.” And then you go to the processes and products and people that help you achieve that. How do you treat your people? How do you give them the authority to stop the line? How do you give them the authority to make complaints that make their way up to the top? How do you establish that culture? And then you look at the products and the processes. I will tell you having spent some time a number of years ago, looking at the nuclear submarine industry, there are two things that went along with the reliability there. One was the admiral who started it, Admiral Hyman G. Rickover,realized that if they ever had a nuclear accident, that was going to be the end of the program. One nuclear accident and the entire program would be scrapped. He took personal responsibility for instilling certain values in every officer and every single person on that sub. And then the second thing, of course, is remember, you’re on that sub. If something happens, nuclear accident or not, you’re on that sub, and you’re in deep trouble. So, people train and train and train and train. Yeah, they do it on aircraft carriers too, and other places and other aspects of the military. But it’s that sense of personal responsibility and accountability for zero harm. Paul O'Neill recently died who had been the CEO of Alcoa and he instilled that at Alcoa. He went to Alcoa from the government. Their attitude was making aluminum is really dangerous. And it is, if you’ve ever been in those kind of plants with the smelters, and all the rest of that kind of fire. But if there’s an accident, rather than accepting it as inevitable, I’m going to put together all the senior staff, all the senior staff, and we’re going to talk about it and how it can be prevented. Whether you’re the lawyer or the marketer or whatever. And so he established a culture that workplace accidents were important and preventable, and the accidents went down. And that’s what we need to do. It’s not that anybody is intentionally unsafe. Not true at all. And everybody in hospitals tries to do the right thing. But we do not have a culture that looks at zero harm as a goal as opposed to a slogan. And that’s the thing that I would do if I had any power over what actually happens in the frontlines. 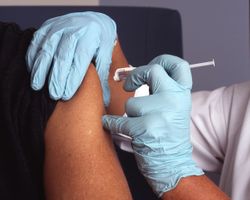 Ready for the Next Pandemic? (Spoiler Alert: It’s Coming)

Q&A: MIS-C Means Kids Not Out of the COVID-19 Woods