A virus that causes cold-like symptoms in humans originated in birds and may have crossed the species barrier around 200 years ago, according to an article published in the December issue of the Journal of General Virology. Scientists hope their findings will help us understand how potentially deadly viruses emerge in humans.

"Human metapneumovirus may be the second most common cause of lower respiratory infection in young children. Studies have shown that by the age of 5, virtually all children have been exposed to the virus and re-infections appear to be common," said professor Ron Fouchier from ErasmusMC in Rotterdam, The Netherlands. "We have identified sites on some virus proteins that we can monitor to help identify future dominant strains of the virus."

Human metapneumovirus is related to the respiratory syncytial virus, measles, mumps and parainfluenza viruses. It infects people of all ages but is most common in children under 5. Symptoms include runny nose, cough, sore throat and fever. Infection can also lead to more severe illnesses such as bronchitis and pneumonia, which can result in hospitalization, especially in infants and immunocompromised patients. HMPV infection is most common during the winter and it is believed to cause up to 10 percent of respiratory illnesses in children.

"HMPV was first discovered in 2001, but studies have shown that the virus has been circulating in humans for at least 50 years," said Fouchier. "HMPV is closely related to Avian metapneumovirus C (AMPV-C), which infects birds. Because of the similarity, scientists have suggested that HMPV emerged from a bird virus that crossed the species barrier to infect humans."

Metapneumoviruses have high evolutionary rates, similar to those of other RNA viruses such as influenza, hepatitis C and SARS. By understanding the evolution and emergence of these viruses the scientists hope to develop ways of monitoring and predicting the emergence of new pathogenic viruses.

"We investigated the evolutionary history of metapneumoviruses using genetic information available for numerous strains of HMPV and AMPV-C circulating in humans and birds," said Fouchier. "We calculated that the moment of divergence between HMPV and AMPV-C occurred approximately 200 years ago. Therefore, HMPV probably originates from an AMPV-C like virus that crossed the species barrier to infect humans around that time. Besides the evolutionary history of metapneumoviruses, we also investigated the mutation rates and the selection pressures of these viruses. An understanding of how viruses evolve and how they adapt to new hosts and their immune systems is important, especially if we are to prepare for new, potentially pandemic diseases." 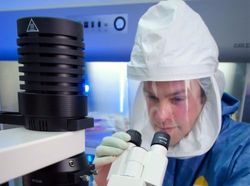