In the United States and around the world, there's a simple action that can help prevent the spread of the flu, diarrhea, pneumonia and other sickness – handwashing with soap and water. This month, Bradley Corporation, an international manufacturer of commercial handwashing products, is supporting Global Handwashing Day since preventable illnesses contribute to the deaths of 1.7 million children worldwide each year. Research shows handwashing with soap can reduce the incidence of diarrhea among children under five by 47 percent and respiratory infections by approximately 25 percent.

"Handwashing is a practice that circles the globe and is important for everyone – men, women, children, the elderly and every individual," says Jon Dommisse, director of global marketing and strategic development for Bradley Corporation. "This month, we're using our social media channels to help spread the word and promote the benefits of handwashing."

For the past five years, Bradley Corp. has conducted an online Healthy Hand Washing Survey to call attention to hand washing and its role in keeping people healthy.

While the survey has found Americans realize the importance of handwashing, it also reveals many take short cuts when it comes to washing fully or thoroughly. The most recent Healthy Hand Washing Survey indicates the majority of us (55 percent) are not washing long enough. The Centers for Disease Control and Prevention recommends washing for at least 20 seconds to allow enough time to remove and rinse off germs.

In addition, the survey reveals more and more Americans are simply rinsing their hands with water instead of soaping up after using a public restroom. Last year, 70 percent confessed they had skipped the important cleansing step, compared to 54 percent who said that two years prior.

This summer, Bradley expanded its Healthy Hand Washing Survey to the United Arab Emirates. The survey was fielded in May when MERS cases were showing up throughout the Arabian Peninsula. The survey found the majority of residents improve their handwashing habits in response to news coverage about airborne or foodborne illnesses. 51 percent of those polled said they wash their hands more frequently and 34 percent wash more thoroughly or longer after news stories about infections and viruses.

Like Emiratis, Americans also respond to news coverage of airborne or food-borne illnesses. More than half of respondents (57 percent) said they step up their handwashing habits as a result of media reports. 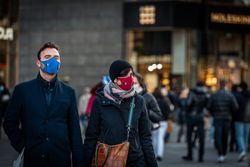