Self-Contamination Risk Is Real. Can a New Approach Help?

Frank Drews, PhD, and his research team had interviewed many hospital employees, from environmental services workers to physicians, hoping to find the kind of clue that could advance patient safety. Before long, they noticed a peculiar habit. When these healthcare workers returned home after their hospital shifts, many of their shoes remained outside, near the door or beside the house.

But pathogens didn’t require shoes to walk into the home. In their research, Drews and his team observed 48 healthcare workers as they doffed personal protective equipment (PPE), in this case disposable gowns, in 7 different departments at 2 hospitals. During the process, nearly half of the personnel potentially self-contaminated, and 42% failed to follow hospital-issued instructions for rolling up the gowns. Just 23% “avoided overt actions” linked to self-contamination, according to the study’s findings, published recently in the American Journal of Infection Control.

Investigators observed more than a dozen improper actions taken by participants, some of whom untied gown straps, used gloved hands to touch clothing, and rolled the gown with their bare hands. In some instances, they did not tie the gown at all and doffed while holding an electronic tablet. The contents of PPE trash cans overflowed onto the floor, while some items were disposed of outside the room.
On its own, the frequency of deviation from US Centers for Disease Control and Prevention (CDC) and hospital guidelines concerned Drews. But the missteps also pointed to a larger problem in infection prevention: poor design.

Work on this research began with a grant from the CDC’s Prevention Epicenters Program, which had homed in on PPE and human factors. Drews, a cognitive psychologist focused on human performance in real-world settings, and his colleagues jumped at the chance to investigate PPE cues in a hospital context. The fusion of funding and interdisciplinary expertise made for an investigation of greater scope.

“By pulling in all the expertise from many, many areas to have a number of people looking at it very systematically, you can produce results that are more likely generalizable,” he said.

First, there was the design of the disposable gowns, particularly the strap and the closing mechanisms, which Drews said made procedural violations appear attractive to healthcare workers. For example, when partic- ipants tied the knot in the front, they might have later untied that knot because they could see it on their body, an error that increased the potential for self-contamination. Protocols, on the other hand, required healthcare workers to tie the knot in the back and pull off the gown.

“I think what we demonstrate here is really a cascading sequence of problems,” Drews said. “It is indeed originated by a certain design decision that is made when people develop these types of gowns.”

The solution, however, could be simple. He pointed to a different kind of a gown designed by his research team. Rather than tying a knot to secure the garment, healthcare workers who wear this gown may use a glue strip, ensuring they close access in the correct place.

“We’re dealing with a system that has many, many burdens imposed on people working in the system. And often, people have time pressure. They have limited resources. They have limited attention,” he added. “We’re often looking at problems in an isolated fashion, so we solve some problems, but we fail to acknowledge that an intervention might actually lead to a lot of surprises.”

Consider this: Several years ago, Drews and his colleagues examined the delivery of oral care for patients using a ventilator. If clinicians were required to perform an extensive search for the last known date that oral care was delivered, they opted to forgo care. But when investigators placed a sticker containing that information on the oral care pack in the patient’s room, clinicians completed the task. The problem dissipated thanks to easy access to pertinent information.

Infection preventionists who aim to scale positive behavior in activities must anticipate the consequences of interventions, Drews said. If a gown is confusing to don or doff, how might a person react? To gain understanding, infection preventionists need to identify the factors that motivate their colleagues.

“As someone working in infection prevention and control, I’d want to understand what is getting in people’s way and then try to understand how we could solve the problem without creating new problems,” he said. “No one is doing this out of maliciousness.”

Success lies in the products and protocols that make it simple for healthcare workers to do their jobs. Otherwise, Drews noted, it’s possible that clinicians will overlook doffing procedures in favor of quicker patient care. 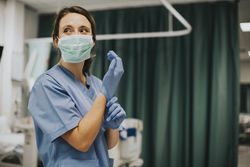 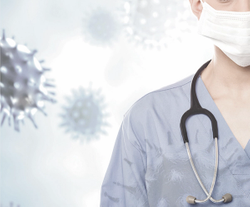