Two studies examining the relationship between turnover of nursing staff and quality problems in nursing homes have found adverse outcomes. This comes at a time of greater demand for care by the growing numbers of elderly Americans.

The studies, both published in December, were based on data from the 2004 National Nursing Home Survey, which generated a sample of 1,174 nursing homes representing more than 16,000 nursing homes in the United States. These data were linked by facility to quality outcomes from contemporaneous databases used to monitor standards of nursing home care. The linkages were to Quality Indicators from Nursing Home Compare and to data on deficiencies of care from the Online Survey, Certification and Reporting (OSCAR).

Staff turnover is of concern for nursing homes, as high turnover has been associated with increased adverse outcomes. These studies suggest that preventing staff turnover should be given greater emphasis.

In the first study, Are Nursing Home Survey Deficiencies Higher in Facilities with Greater Staff Turnover, published in the Journal of the American Medical Directors Association, Nancy B. Lerner, DNP, RN, BSN, an assistant professor at the University of Maryland School of Nursing (UMSON), and colleagues including UMSON professor Alison M. Trinkoff, ScD, MPH, RN, FAAN, found that turnover for both licensed nurses and certified nursing assistants (CNAs) was associated with quality problems as measured by deficiencies considered to be closely related to nursing care (qualify of care, qualify of life, and resident behavior deficiencies reported by OSCAR).

In the second study, Turnover Staffing, Skill Mix, and Resident Outcomes in a National Sample of U.S. Nursing Homes, published in the Journal of Nursing Administration, Trinkoff and colleagues found that adverse resident outcomes such as pressure ulcers and pain are related to high turnover among CNAs. The study, even after controlling for factors including skill mix, bed size, and ownership, found nursing homes with high CNA turnover had significantly higher odds of pressure ulcers, pain, and urinary tract infections.

Â Changes are needed to improve the retention of care providers and reduce staff vacancies in nursing homes to ensure high quality of care for older Americans, Lerner states. Further the study by Lerner and colleagues suggests the need for continued research using deficiencies as a measure of quality in addition to the quality indicators used by others.

Trinkoff AM, et al. Turnover, staffing, skill mix and resident outcomes in a national sample of US nursing homes. Journal of Nursing Administration, 43(12), 630-636. 2013. 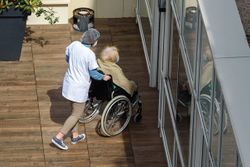 Year Zero: How COVID-19 Changed Everything