Health and Human Services Secretary Xavier Becerra: “Phase 2 of the COVID origins study must be launched with terms of reference that are transparent, science-based, and give international experts the independence to fully assess the source of the virus and the early days of the outbreak.”

If officials with the Chinese Communist Party had hoped that their alleged coverup of how COVID-19 started—a possibility that includes that the world- and history-altering deadly pandemic resulted from a lab leak in Wuhan, China—that hope might be dwindling lately. China has been cited by—among other organizations—the United Nations and Human Rights Watch as a repressive regime that’s become more repressive in recent years.

The lab leak theory, once considered so out of bounds that no serious media outlet would touch it (that blackout has also recently come under scrutiny), has suddenly moved front and center in the discussion, as we here at Infection Control Today® have reported. “Transparent” has become the operative word.

Becerra referred to a follow-up to an investigation by the World Health Organization (WHO) that concluded that of 4 possible causes of the COVID-19 pandemic, the lab leak theory was very unlikely.

Tedros Ghebreyesus, the WHO’s director-general, seemed to voice ambivalence about this conclusion. “Although the team [of WHO investigators] has concluded that a laboratory leak is the least likely hypothesis, this requires further investigation, potentially with additional missions involving specialist experts, which I am ready to deploy,” Ghebreyesus said in a statement on March 30.

Helping to fuel the push for a closer look at the lab leak possibility came from a letter by prominent scientists published in the journal Science on May 13 that called the WHO investigation biased toward the theory that the pandemic occurred from a zoonotic spillover, mostly because of restrictions placed on investigators by the Chinese government. The other 2 possible causes WHO investigators cited were introduction by an intermediate host (likely to very likely), and introduction through cold/food chain products (possible).

The letter writers say that they are agnostic as to what caused the pandemic, but the lab leak theory should not be discounted out of hand.

One of the signers—Jesse Bloom, who studies the evolution of viruses at the Fred Hutchinson Cancer Research Center in Seattle— told the New York Times: “Most of the discussion you hear about SARS-CoV-2 origins at this point is coming from, I think, the relatively small number of people who feel very certain about their views. He added that anybody who’s making statements with a “high level of certainty is just outstripping what’s possible to do with the available evidence.”

Becerra said at yesterday’s virtual meeting that “Phase 2 of the COVID origins study must be launched with terms of reference that are transparent, science-based, and give international experts the independence to fully assess the source of the virus and the early days of the outbreak.”

Becerra also said that the investigation needs international assistance—data from all countries—including Taiwan, which China doesn’t recognize. “Global collaboration will be key in tackling the many challenges still before us,” Becerra said, adding that “collaboration with non-state actors must continue, and we must invite Taiwan to be a part of the World Health Assembly as an observer.” 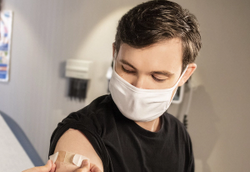