Informatics can support patients at all stages of their experience by increasing awareness of UEs, encouraging intervention and resolution, detecting and managing invisible harms [such as emotional trauma], and reducing barriers and sharing report updates.

In the middle of the night, while caring for her child in the neonatal intensive care unit, hospital staff told a mother to move to another room. “This transition would have been a lot more respectful and courteous with some warning...when we aren’t sleeping and recovering from severe trauma,” she recalled.

Another patient complained that a “nurse did not remember to put on gloves or sanitize [her] hands prior to dispensing medication.”

One had to deal with a “staph infection following surgery.” That required even more surgery “to patch a bursa sac on my shoulder.”

And 1 man felt that his caregivers’ lack of communication proved that they had given up on him. This led to a difficult recovery that delayed discharge for a month and a half.

These are just some of the stories gleaned from an open-ended survey of 242 patients at 1 pediatric and 1 adult care hospital published recently in the Journal of the American Medical Informatics Association.1 Patients often react to these and other undesirable events (UEs) by either requesting different providers or transferring to another hospital, or by making their complaints known to hospital staff.

Investigators at the University of Washington, who conducted the survey, developed a conceptual model of how informatics might be able to help patients better report and/or avoid UEs.

Informatics can “support patients at all stages of their experience by increasing awareness of UEs, encouraging intervention and resolution, detecting and managing invisible harms [such as emotional trauma], and reducing barriers and sharing report updates,” states the study, funded by the Agency for Healthcare Research and Quality.

The study categorizes 4 stages where information about UEs, and opportunities to prevent and/or respond to them, can be made: the occurrence itself, the window for intervention, identification of both visible and invisible harms, and reaction and response.

Investigators noted that “existing patient-facing technologies,” such as electronic health records (EHRs), can allow patients to monitor their care and identify mistakes.

However, “Despite extensive research demonstrating the safety-related benefits of such technologies, recognizing UEs is just 1 aspect of the patient experience,” the study states.

What happens when patients’ concerns are not heard?

For instance, 1 patient, whom the study described as a “caregiver,” stopped her

providers from administrating the wrong treatment to her hospital roommate. She submitted a complaint, but the hospital didn’t follow-up. “I don’t know at this point if [the] team has been talk[ed] to,” she told investigators. “It would be nice to know that the follow-up continued that far.”

What happens when patients feel too vulnerable to speak up, or are unaware of their rights in situations, or when the fast-paced tempo of treatment means that the damage is done before they get the chance to prevent it?

Informatics can encourage patients to request a solution to their problems and can facilitate patient-provider mediation by offering tips on how to best navigate these possibly awkward conversations.

Investigators also cite a tool-called MySafeCare-that “allows patients to intervene in UEs in a real-time, low-burden way that does not require direct interaction with providers. This nonconfrontational format helps patients speak up about concerns as they occur.”

In addition, informatics might allow patients to trade information about their care with each other, which in turn would give them the confidence to speak out about UEs.

“Multimodal reporting” would include email, text messaging, phone calls, patient portal forms, or voice-based technologies, such as Amazon Alexa and Google Assistant, that would help patients with cognitive or physical difficulties, due to illness or treatment, voice their concerns.

Investigators offer tips on how to manage invisible harms such as emotional trauma and life burdens. As the “invisible” suggests, they are difficult to detect.

“For example,” the study states, “researchers have studied social signal processing as a way for patients and providers in clinic to receive real-time feedback about the tone and empathy conveyed throughout their conversations. Similar social signal processing solutions could be adapted for the inpatient setting to surface negative emotions or reduced trust that patients might express after handling a UE.”

Investigators acknowledged some possible limitations: voluntary participation may have caused selection bias, and the survey participants were patients at urban facilities, so the findings might not be applicable to the broader population. Still, some cautionary tales can only be told by the patients.

Talk about an undesirable event.

January/February 2020 Bug of the Month 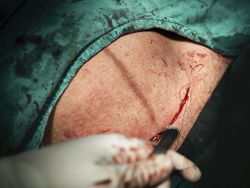